She’s alive.  Yes, Mavis’s engine is in and has successfully turned over.  Honestly, the whole thing scared the CRAP out of me.  First off, after connecting the electrical and gas lines, and actually putting gas in the car, things started feeling dangerous.  The possibility of electrocutions and explosions became a reality and I couldn’t remember if Pop said amps burn you but voltage can kill you, or the other way around.  It’s one thing to talk about souping up a little I6, another to have a great time building it, but once you connect everything to real power…holy crap!

Couple KY visits ago, we installed all of the engine’s accoutrements, as I like to call them.  Accessories such as the water pump, thermostat, starter, fly wheel, clutch disc, pressure plate and bell housing.  Then, headers and transmission, which turned the engine into a 5 foot long beast we needed to get into Mavis’s little body.

Unless we were missing something, there is no way to remove the front upper radiator support bar in the engine compartment.  So, to properly install the engine, we really needed an engine hoist with an adjustable bar to allow us to tilt the engine in order to ‘insert’ the transmission through the engine compartment, move the whole kit and kaboodle back and in, lift the trans nose before it scraps the ground and settle the 400 pound engine and transmission assembly snuggly into place.  We didn’t have that special hoist, but because we are geniuses we figured we could make this work without.  It was just a matter of hoisting the engine in a way that allowed for the correct tilt and then pushing the car forward as we carefully lowered the engine in.

I was NOT looking forward to this procedure, as it’s nerve-wracking to see your newly built engine dangling from chains secured with a few temporary bolts…let alone at a jaunty angle.  As I enjoyed my coffee on the porch the morning of ‘insertion day’, Pop heads out the door saying, “I’m going out to experiment with some fulcrum points.”

But he was half way to the garage, determined, with plan in place.  I stayed right were I was and finished my coffee.  Once Pop felt confident in his fulcrums, we lifted the whole thing up and in.

The whole process took about 10 minutes and consisted of me under the car a good amount moving the jack into the right position, guiding the transmission’s tail onto it and then raising it as the engine moved down and into the compartment.  I will admit that once this was all done, we ended up lifting it back out order to ‘manipulate’ the shock tower so that the headers were not touching it.  This consisted of first banging the hell out of the shock tower and then heating the whole thing up and prying the hot headers away from the wall.  Come to find out that the whole engine was shifted to the right about 1/2 inch due to the fact that we installed the motor mounts opposite.  Who knew there was a designated right and a left?  (Apparently, not us.)  Plenty of clearance now!

Next up, connecting the gas line from the tank all the way to the carburetor where it is mixed with the other vital ingredient, air, and turned into energy to keep the motor running.  We had the main line in, but needed to bisect it for a fuel filter.  We installed a new gas hose to get it from underneath the car and up into the engine compartment (Pop and I LOVE rubber grommets, look how clean it is.) 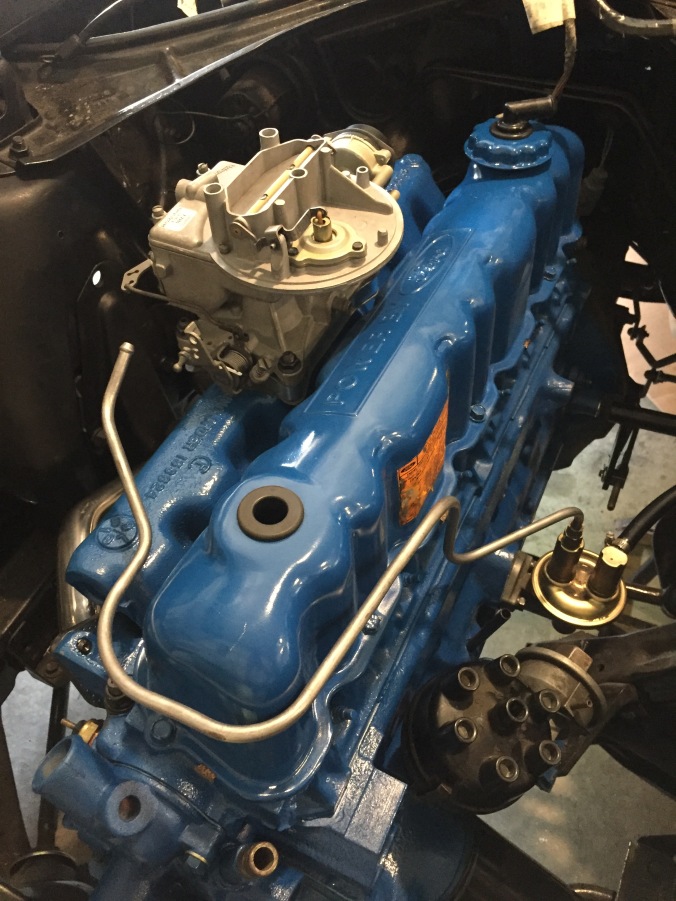 Now, to test that the gas is flowin’ correctly and we don’t have any leaks from the tank.

We celebrate even the small successes, as one should.  A final connection to the carb and some tweaking to convert it from an automatic choke to a manual one and we are done with that job!

Next up, electrical.  We were trying to save as much as we could because the electrical system in even a ‘Simple Man’s Machine’ is really complicated.  We had labelled the wires carefully when taking everything apart, so all I had to do was clean them up, replace any really bad parts, re-tape and reroute them to their various locations.  No problem, right?  WRONG!  It totally sucked.  Look at this mess!

Ok, so I kind of loved it.  I made them all so pretty and even ended up wrapping parts of the wiring in looms to made them super neat.  Squeeee! 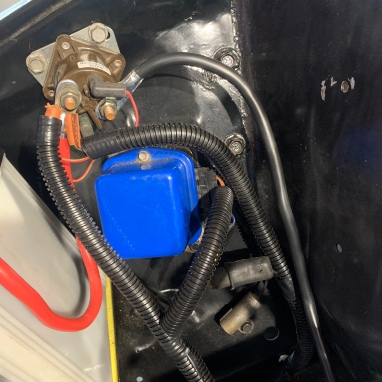 We had some trial and error around figuring out what went where when it came to the solenoid and voltage regulator.  The first time the fan came on inside the car was incredibly exciting, celebratory even, as it blew 50 year old pine needles in my face.  So with gas and electric connected, there was but one thing left to do…start her. 🙂

The engine turned over first try, which was just amazing.  I don’t know why I didn’t think it would, but you build this thing from engine block up and can’t imagine it’s going to just…start.  Pop never doubted it.  So exciting.  We’ve since worked on the timing and have a little more work to do to get her idling right, but this was just HUGE!

2 thoughts on “Get Your Motor Runnin’”