Holy crap we found it.  Found the car that will take up all of my free time and a lot of mind space for quite possibly the entire year to come.  I can’t believe it’s happened this fast and also can’t believe that neither Pop nor I found it.  My brother Mathew did.

Momma and Pop were visiting Mat last month and I was on the phone with them all discussing the Plymouth Duster we had decided to pass up.  It felt like I needed to nail down the type of car I really wanted and intensify the search based on that.  When Pop asked which car I was really feeling serious about, the one that really got me excited about the project, I had to admit that I truly dug the Ford Maverick.

The Maverick is a smaller car, has a beautiful little shape to it and was one of the very first cars that caught my eye when I started looking.  Now, I say I had to ‘admit’ that the Maverick was the one because the Maverick has gotten shit over the years for not being, I don’t know, cool enough.  People write that it is a cheap car, a poser, a pseudo muscle car, etc.  Five years after the Mustang came out, which was based on the Falcon’s platform, Ford introduced the Maverick, which also shared the Falcon’s engine and running gear.  It was not only more affordable than the Mustang, but was also meant to be Ford’s competitor to the crazy popular Volkswagen Beetle and other foreign cars that were getting bought up.  At the time, the 6 cylinder 200 and 250 engines had more than enough power for a subcompact ‘economy’ car and they marketed the thing as ‘The Simple Machine’.  Mavericks made before 1973 didn’t even have a glove compartment as that was apparently an added expense for an unnecessary luxury.

The Grabber trim package was introduced later in 1970 and with its 302 V8, exterior graphics and spoiler, was definitely vying for the attention of the muscle car crowd.  But still, there are those that won’t give this little underdog any respect…and that’s another reason why I love it.  I’ve always rooted for the underdog.

So when Mat drove home from visiting with the P’s that night and caught a glimpse of what looked like a Maverick on the side of the road for sale, he couldn’t believe it.  Not an hour after telling him that I wanted a Mav, he found a Mav.  He texted, “Totally hooked a u-turn on Rt. 14…I was like, holy shit, a Maverick!”  He pointed his brights on her and sent me what would be the first peek at my baby. 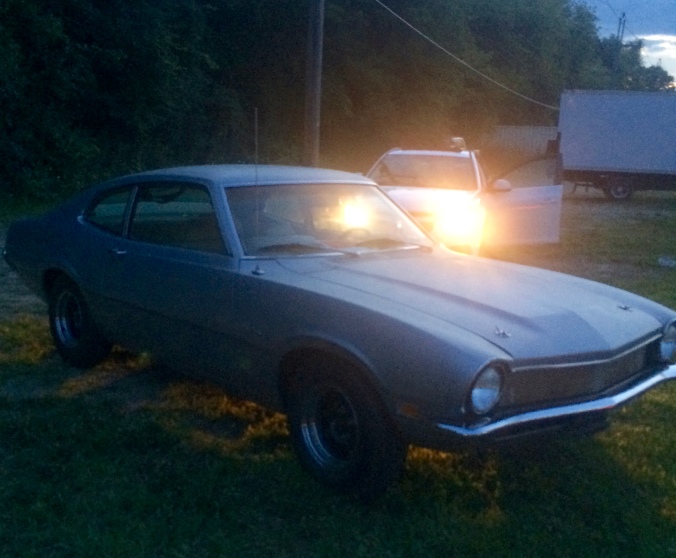 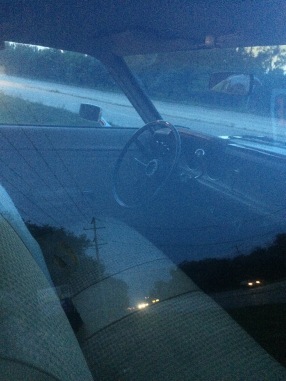 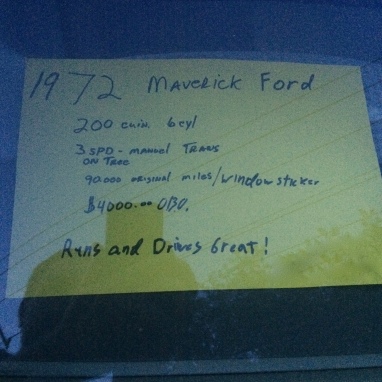 The next morning the P’s took it for a test-drive in the rain.  Momma Face Timed with me which was hilarious.  God I wish I had video.  Pop’s driving, it’s loud, raining hard and Momma is about as steady with the camera as an old drunk.  As she discovers things (she’s as excited as we are) she’s yelling over the noise, “Jan!  The windshield wipers work!  Ooooh!  Look at this, there’s a shelf where the glovebox would be!!  The interior is decent.  Can you see this??  We couldn’t figure out the seatbelts!! Can you hear me?  Where do I have this thing pointed?!!!”  This is when I tell her about the option to turn the camera lens around rather than the camera itself.  “Oh, I had no idea!  Woody!!  Be careful!  How far are you planning to go?  Can you see?!?  I can’t believe this rain!!”  I love that woman.

The 1972 Maverick has a 200 cu. in. engine with an inline 6.  This means that it is a 6 cylinder and they line up in a row, rather than 3 on both sides of the engine tilting outward (hence the V in a V6 or V8.)  It’s got a manual transmission with ‘3 on the tree’ which means the gear shift is on the steering column.  It’s currently silver, but based on the VIN it came out of the factory a bright yellow. Pop and I negotiated with the seller and I ended up buying it for $3,500.

I am so unbelievably excited!  Although I feel like a mother whose newborn has been whisked away before having a chance to hold it.  I look at the pics every day and I’ve had a couple video ‘visits’.  Here’s a general overview from Pop:

The Mav is currently parked in Mat’s garage in Cary, IL.  The plan is to drive Mike’s truck out there mid October, trailer the car and haul her down to KY where I’ll spend a few weeks.  I’m really really looking forward to seeing my Mat.  He is one of the kindest people I know and a great brother, father and friend.  He’s empathetic and emotional, loving and caring.  Mat has followed in Pop’s footsteps and drives a truck for a living.  He works his fucking ass off and still seems to find time to help anyone in need.  But I’ll tell you, in recent years, Mat has been given the shit end of the stick more often than not.  He has been tested past the point where many would have given up.  He is a single parent, trying to raise an incredibly troubled son while his other son lives miles away.

So to Mathew I say…You are a fighter.  You continue to get up every morning and face the long work days and weekend overtime as well as the ongoing, physically and mentally exhausting, heartbreakingly sad battle at home.  I am very proud of you.  Thank you for finding this little car for me.  I truly believe it was a sign that it was you who found it.  You are now a permanent part of this journey with me (especially because you’ve already committed to helping us with brakes.)

I promise you little brother, the underdog will have its day.  I love you and I’ll see you soon.

One of my favorite pics.  Mathew with Hudson…always taking care.

4 thoughts on “Root for the Underdog”