I daydream a lot about driving Mavis.  She looks kick-ass, I look even better.  I feel amazing, windows down, engine gurgling and popping, paint flecks shimmering in the sun.  Sitting at a red I don’t even notice getting checked out because I’m so into my machine.  Then, I put her in gear and coming off the line it happens.  I stall.

Heart beats, hands sweat, try again and…stall.  This time hard, so my head jerks forward then kicks back against the headrest.  It’s ok, I’m cool, shit happens.  One more time and – NOPE!  Mavis lurches forward about a foot before the tires screech to a stop.  If anyone wasn’t already witnessing this wonder behind the wheel, they are now.

I’ve never owned a stick shift, but I can drive one if I had to.  I used to drive an old boyfriend’s Suzuki Sidekick to college in Chicago and I don’t remember having any issues with that other than almost rolling it when someone cut me off on I-90.  I love the Maverick’s three speed transmission and Pop and I are keeping it for sure.  Before we broke her down I drove her and didn’t do too bad.  So, where do these imagined ego-busting scenarios come from?  I’ll tell you exactly where.  Torrance, California, 1988.

D, Jenni, me and Shelms.

My girls and I are 17 and 18 years old and staying in one bedroom of Jenni’s grandma’s house.  We’re about four blocks from the ocean and it couldn’t be more perfect.  Basically no supervision, spending all day at the beach, cool water, warm air, boys blonde and tan.  Bonus was that Grandma let us use her VW Rabbit that she didn’t drive.  Bummer was that no one had driven it in what looked like 20 years and it was in shit shape.  May have even seen fire at some point as the plastic on the steering wheel was melted off its metal frame.  But we were Midwestern teens in California and we had wheels.  Life was good. 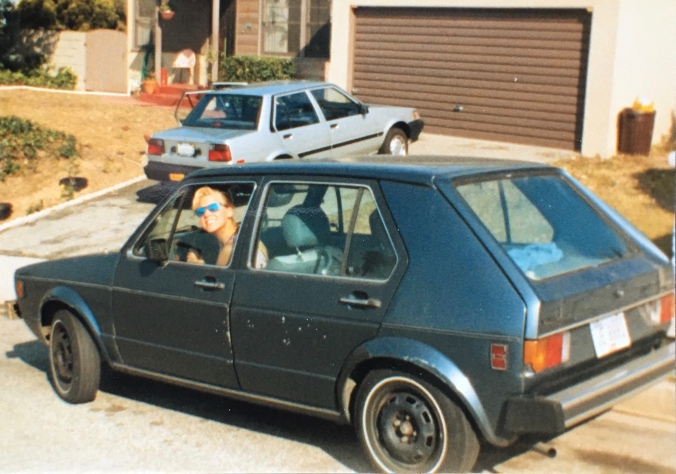 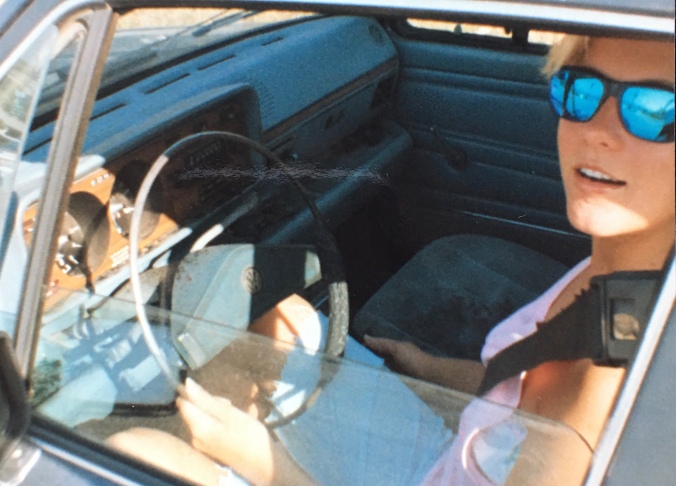 We drove that car to Santa Barbara on a side trip to see Beth’s cousins Chris and Andrew (blond and tan).  We went to parties with belly dancers and hung at the beach.  I remember thinking I could almost pull the California girl thing off but for the time I got whomped upside the head so hard by a wave that it slammed me onto the ocean floor.  I got up, acting all cool while I found my bikini top and trotted back to the beach like I hadn’t just recieved a jet-powered saltwater enema. 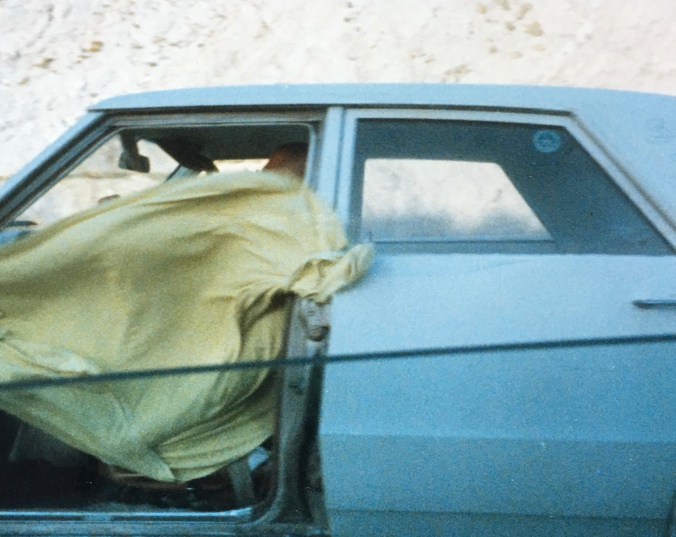 At least we weren’t as bad off as this guy.  At this point, wouldn’t you just forgo the sheet? 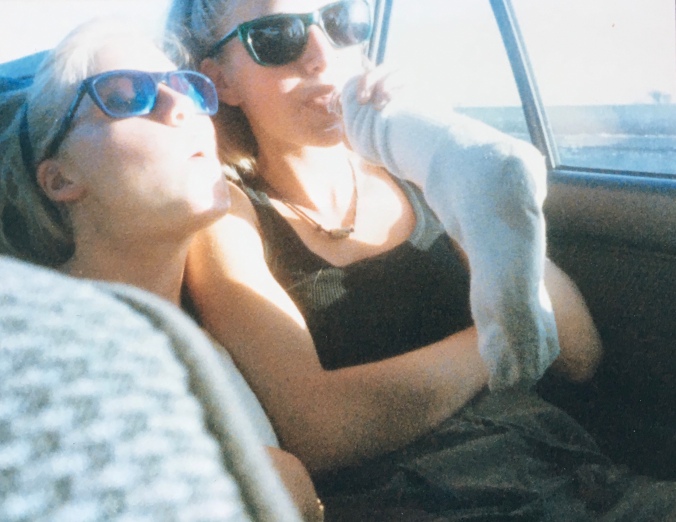 “If we hide our booze in a dirty sock…no one will know we’re drinking, underage, while driving.”

Back in Torrance, to get home from the beach we had to drive up a super steep hill every day.  That one day, that one time, we stalled halfway up and could NOT get this car into gear.  We laughed and laughed as we inched backwards down the hill every time Jenni tried to move that little car filled with our five sweaty, Hawaiian Tropic soaked bodies.  This got even more HIGH-larious when a car full of guys pulled up behind us, honking and teasing.  Our giddy teenaged ‘panicking’ rose to new levels.  “Come ON Jenni!  Oh my God, oh my God, they’re right behind us!  Don’t hit them!!  Tee tee hee, hahaha!!!”

Then a third car rounded the corner at the bottom of the hill going fast and BAM, slammed into the back of the guys car.  Within seconds after impact the girlfriend of the man driving is out of the car, heading up the hill, screaming in Spanish and swearing worse than I do.  She gets the quick gist of what is going down and comes at us, blaming us for the crash.  One of the guys has now moved our car to the side of the road and we’re pouring out of it.  This chic is coked up or something because she is LOSING HER SHIT, pointing at each of us individually while yelling, “Rush me, bitch!”  Her boyfriend is behind her trying to hold her back with his arms wrapped around her waist and her tit keeps popping out of her tube top.  She’d pull it up and the other one would pop out, then both titties.  She was like a wild dog, she didn’t give a crap.

While this is all happening, Shelma is cracking jokes and the other girls are laughing their asses off, but I’m HORRIFIED.  I do not like conflict, I do not like to fight, I’m afraid of this woman and at the same time can’t stop thinking about how dark her nipples were.  Eventually the cops were called, things calmed down, and we were deemed ‘not guilty’.  Then the guys invited us to a party.

That, my friends, is where my irrational fear of manual transmissions comes from.  I act tough sometimes, but I’m soft.  The girls went out that night, but no, I did not go to that fucking party.  I was too afraid the crazy titty chic would show up and try to rush me. 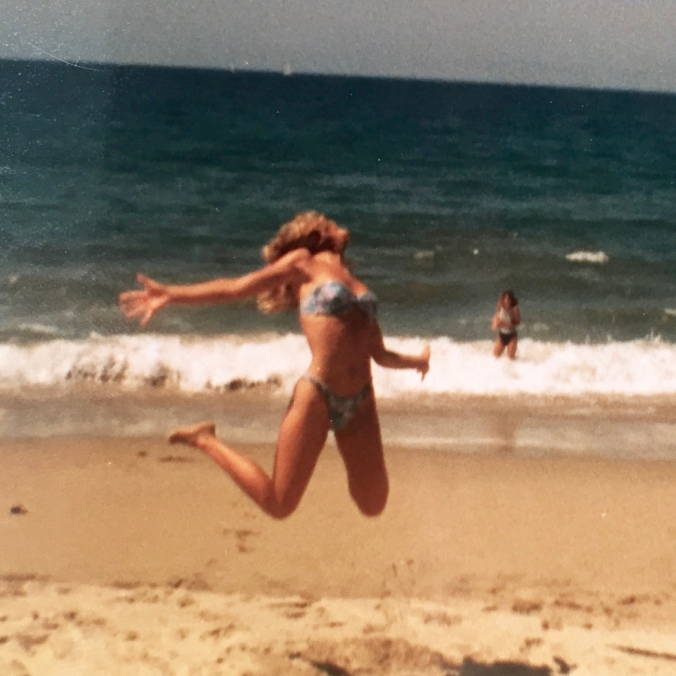 Ah, to be young again.  I could never land this now, although I don’t believe I did then.