I come from a family who likes to put shit together.  We’re tinkerers and fixers.  Jack and Jill’s of all trades but masters of none. Our group text strings usually involve pictures of someone’s weekend project, lots of thumbs up and many questions about the particulars.

Paula and Woody were high school sweethearts until Pop went away to the army.  They broke up and continued to grow up following their own paths.  But, Pop continued to write her at college from his post in Germany, obviously wanting to stay on her mind. It was on a spring break night home when friends got together on a Lake Michigan beach, building a fire and hanging out.  Pop was back and also there.  She says that when she looked at him in the light of the fire, she just knew…he was the one she wanted.  To this day, that is one of the reasons she likes fires so much.  She says it reminds her of that night and her crystal clear realization that she loved Pop deeply.

With Pop’s first truck.  He had painted on the front, very small, ‘Paula’s Problem’.

But the years following were not always easy.  Pop was on the road a lot and could be gone weeks at a time.  In those days there was no way to easily keep in touch and the phone calls could be as random as the pay checks.  By the age of 30, Momma had brought four babies into the world and was doing all she could to love and support them, mostly by herself and with little means.  She was smart and scrappy and I attribute my frugality and the respect I have for my physical belongings to her.  Pop hauled furniture for most of his career and she would sell the used moving boxes out of the garage for extra cash.  We always had a big glass of milk at dinner, even if it was powdered, and sometimes more like cloudy water as she tried to stretch it.  As an adult, I still get a little tingle of excitement when I see a pop can on the ground.  We used to collect them and throw them in a big box in the garage to recycle for a couple bucks.

Tired but happy.  This is while Pop was working for United Van Lines.  Momma will sometimes say even today, “I miss my babies.”  We were so loved.

She found a way to get us a membership to a neighborhood swimming pool, but it cost $200. She told me she spent the last of what was in the savings account to join.  That pool was a Godsend during the hot summers as we had no air conditioning and she had four young kids to deal with all day.  She was young and fun and would play in the water with all of us.  I loved to cling to her back like a little sucker fish while she swam deep down.  I remember the feel of her strong shoulders under my hands as I tried not to slip off.  We used to laugh about her thick, curly red hair that the water would roll off like a duck!  She still loves the water and at 76, leads the water aerobics class at the local pool.  I’ll go with her when I visit and love bouncing around the pool with all the old gals.  They love when she teaches because, “Paula really gives us a good workout!”

Momma with Grandma and all of us.  She could carry all four of us at a time (not the norm, but for fun).  One on her back, one on the front and holding the two smallest in both arms.  She was and still is a fierce Momma Bear, check out those arms!

Momma rejected her Catholic upbringing as a young woman and adopted instead a spirituality that she has found great strength in.  I have memories of her teaching me the Serenity Prayer as she sat on the side of the bed while I struggled through many bouts of depression, something she has battled herself.  She has always appreciated the beauty and wonder of nature and is most at peace in it.  We camped a lot as a young family, always hiking, fishing and playing in the forest.  (Pop used to tell us kids we were Pagans…not totally accurate.)

Momma’s a feminist, always on the right side of woman’s rights, and taught me my worth as a woman by example.  As a northern woman living in a southern state as well as being involved in the male dominated world of trucking, she has more than once had to assert herself as someone to be listened to.  She has supported other women in need for years now through organizations she’s involved in.  She will be your most loyal friend and stand strong with you but also knows the value of a good cry and has an unbelievable amount of empathy.

This past Mother’s Day I called my mom, needing her love and support desperately.  Here it was to be her day, a celebration of her, and I just sobbed into the phone, trying to will her physical body through the line so she could hold me.  Although I’m almost 49 years old, and these types of calls to her have become less and less over the years, I still need her.  I still call and start with, “I’m OK, but…” and burst into tears.  This time there was no, “I’m OK,” just pain so bad I wanted to disappear.

She listened, she didn’t judge, she didn’t match my level of intensity with her own fears but instead was a steady, calming force for me.  She was what she’s always been; there for me, solid and strong.  She reminded me of my own strength and to take care of myself first and foremost.  She reminded me to breath and take it one day at a time…one hour at a time if that was all I could manage.

This woman is a force.  She knows how to put shit back together.  She’s dealt with a lot of crap, seen some tough times and came out the other side with her integrity intact.  I love you Momma.  Thank you for being who you are; honest and real.  Your ability to be vulnerable is the very essence of what strength truly is, having the courage to open your heart and dare to love deeply. 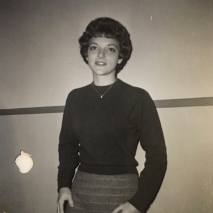 Hey, hey Paula, I want to marry you
Hey, hey Paula, no one else will ever do
I’ve waited so long for school to be through
Paula, I can’t wait no more for you
My love, my love