Beth was the proud president of the Asshole Driver’s Club, but it wasn’t because she was an asshole, she really wasn’t.  She just didn’t pay attention as well as some when behind the wheel.  She paid attention to everything else; you, the conversation, the music, the journey, the destination.  She was the one who turned at the last second, sans signal.  Crossed three lanes of traffic to exit.  Swerved from one lane into the other while fully turning around to laugh with someone in the back seat.  Driving with Beth was a harrowing, sometimes terrifying experience.

In high school, Beth drove her step-dad Bob’s old light blue Camaro.  I had known that car from my youth.  When we were kids, Bob and Kate in the front seat and Beth and I in the back, some teenager in a Jeep tagged us hard from behind at a red light.  The kid came up to the driver’s side window to tell Mr. Cieslak that he had hit him.  Bob responded the only way one could in such a situation.  He said, “no shit.”

By the time the Camaro was passed down to Beth, it had been given the title of Bitchin’ Camaro (thank you, Dead Milkmen) and had seen better days.  Still, we would park it across two spaces in the high school lot out of respect for its history and because we thought it was hilarious.  Once, when I was (not supposed to be) driving it, Beth was in the passenger seat with her feet up, flat against the windshield.  I took a left into the 7/11 and pop!, the windshield cracked from side to side.  Then there is the epic story of Beth somehow hooking her front fender over someone’s back fender in a movie theater parking lot.  It took about 5 of the high school jocks to lift the entire front end of the Camaro to free it.  I don’t remember the details, but I would bet anything Beth left a note, because she truly wasn’t an asshole.

She was a sweet heart.  She was hilarious, and brilliant and loving and my best friend since 1977.  Beth passed away earlier this year and I still can’t wrap my head around it.  I’ve been down to work on Mavis twice since she died but writing about that before acknowledging her death didn’t feel right.  She and my girls, Michele, Lisa and Darice, were the first I told about my Mavis mission and they were yelling ‘yes’ even before I finished explaining the idea.  Beth would write or call me after each blog post, telling me how hard she laughed, or cried, always telling me how proud she was that I was tackling this crazy feat.  The last time I heard her voice was on the phone while she sat in her basement digging up old pictures of us for my last post, Titties, Trauma and Transmission.  Another of the long list of memories we created over our 40-year friendship.

Driving to work at the end of this past January I was overcome with a feeling of dread deep in my heart.  The tears came so fast, blurring the road and forcing me to turn back home.  I made it into the house and weak kneed, supporting myself against the kitchen counter, I sobbed.  I said out loud to no one, “something’s not right.”  And it wasn’t.  Beth would die that night.

So, I’ve been struggling and don’t know if, or when, that will ever end.  But I do know that Beth would want me to continue this journey.  Bringing Mavis back to life, accomplishing something new, sharing time with people I love.  We’ve always been a bit cosmically connected.  She’ll know, she’ll watch as I reach my goal.  Then I’ll take a long ride, play ABBA real loud and try not to drive like an asshole.  Love you Bether. 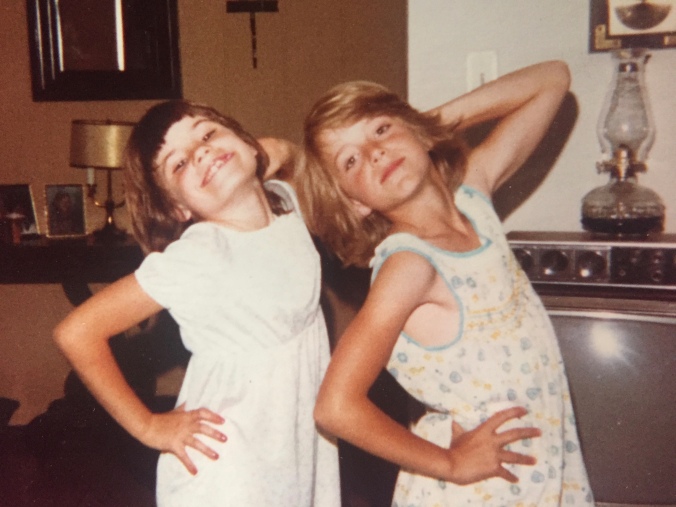 I’m a 70’s child, which apparently makes me a member of Generation X.  I’ve never liked being defined or labeled by others but less so by my own self.  For someone who’s not shy about making a fool of herself to get a laugh among friends and is sometimes too fast to express an opinion with in-laws, a public show of any sort of affiliation, belief system, or political leaning was not my thing.  I don’t know that I ever felt educated or confident enough about one particular subject to defend myself when challenged about what I was projecting. But why did I feel that I would become a target of an interrogation based on what my fucking t-shirt said?  Because I thought people cared more than they really did.  As a kid, I hated going to school after Momma cut my bangs too short. She would say, “Not everyone is waiting to see what Janet Chambers looks like today!”  I remember being at once comforted, but then like, “wait…why not?”

What a relief to grow up and find out that you are not the center of the universe.

So when it comes to choosing a car to fix up with Pop, I feel a complete freedom to find something that is just right, that ‘speaks’ to me and makes me happy.  It is true that for some, a car can be one of the most obvious, outwardly ways of defining yourself.  Old dudes do it with their little penis cars.  City kids with their high pitched mufflers on their way to go Tokyo drifting or whatever and old hippies living in their VWs for instance.  Country folk have their Chevy pickups with gun racks and Calvin & Hobbes praying to an American flag at half mast (or peeing on a Ford logo, both very strong statements.)

Me, I just want to ‘ride, ride like the wind, to be free again’ so I am embracing the time frame I was born in and am looking for a late 60’s early 70’s car. Looked at Ford Falcons and Fairlanes but wanted something less boxy, which pushed me more towards the muscle cars that I love.  Looked at GTOs and Chevelles but these were bigger cars than I wanted, heavy cars over 3,000 pounds.  Camaros were easy to find as project cars, but pricier than I wanted. 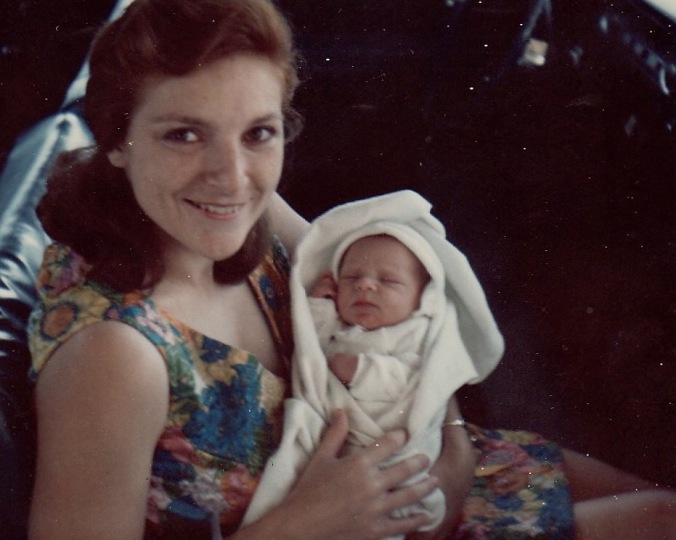 Momma and me coming home from the hospital in the Ford Falcon in 1970.  No seat belts, no baby seat, right up front where I can see my four day old life pass me by in an instant.  That’s how we rolled.

I’m looking at Chevy Novas and late 60’s Firebirds.  I like the power of a V8 but Pop thinks we could also have fun souping up a slant 6.  This has me looking at Dodge and Plymouth.  The slant 6 was standard on the first Dodge Darts and then the Demon was introduced in 1971.  It had a pointier front end which was one of the things I took issue with on the Bird so that is out.  The Demon was Dodge’s response to the popular Plymouth Duster.  Now, this is a car I like the look of.  The ’72 Duster had a V8 but was only a tad over 3K pounds and shorter.  Short I like because I still need to get this thing up my steep driveway when all is said and done.

I saw this Duster in my neighborhood.  It had been sitting on the street so long it had a parking ticket.  I left a message on the car asking the owner if they would consider selling it, but have heard nothing.  It does look pretty ‘done’ though. 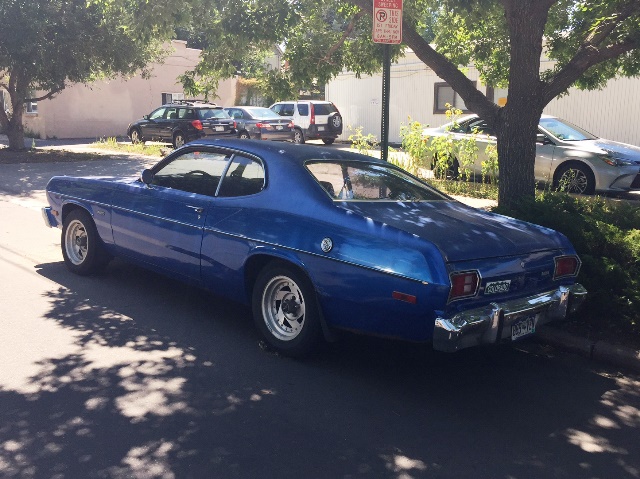 I found a ’75 Duster on Craig’s List and Mike and I went to check it out.  I was VERY excited and kept seeing ‘signs’ along the way there that I was sure were guiding me to the car of my dreams.  We passed Chambers road, my maiden name, and another street named Kentucky, where I would be working on the car with Pop.  I saw a feather hanging from a dream catcher on someone’s review mirror, which the Navajo shaman I had recently visited said I would.  (I know, just go with it.)  I took a lot of pics of the car to talk over with Pop later and got a chance to test drive it.

Sounds a bit rough, but my heart still pounded when I revved it.  Came with lots of extra parts, solid body I thought, in my price range…it was looking good.  Talked to Pop later and it was a no go.  Too much rust, liner gone, extensive body work, etc.  Shit!  Throughout the coming weeks, I would send him links to cars and get responses from him:

1972 Ford Maverick:  “I’m afraid that one is just too rough. That would be a body off restoration which is more than we really want to handle.”

1971 Chevy Chevelle:  “Basically the same engine, trans and body style as the Bird and much rougher shape. 3k would be out of the question.”

1968 Chevy Chevelle: “That is rough. Body work on that order I am afraid is beyond us.”

1969 Mercury Cougar: “We really don’t want a fabric type roof although the Bird started out that  way. I don’t think you would be happy with a cougar as they were a pretty big car and parts would  be difficult to find.”

Getting closer but neither of the following led to anything:

1975 Plymouth Duster: “I’m impressed with the slant six and all the chrome. I can’t tell but looks like a lot of rust in the quarters, fenders and door bottoms. Also I can’t tell if that is a white vinyl top or not, if it’s in good condition I suppose that’s okay.”

Another Duster: “I like the red 1975 the best. Although it says it’s a V6 I don’t find they made one with a V6, it’s probably a slant six which would make it even a better deal.”

I’ll continue looking online but Pop says we’ll probably find our car sitting by the side of the road in a little town somewhere.  He and Momma travel a lot in their camper and are always on the look out.  Besides, Pop’s leery about the online sales world.  He has discovered that he was now officially the ‘target’ of target marketing. 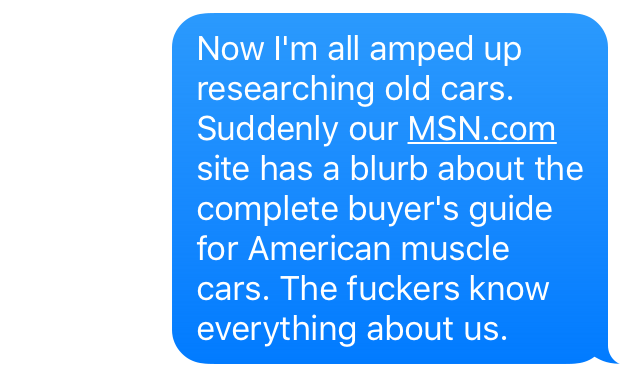 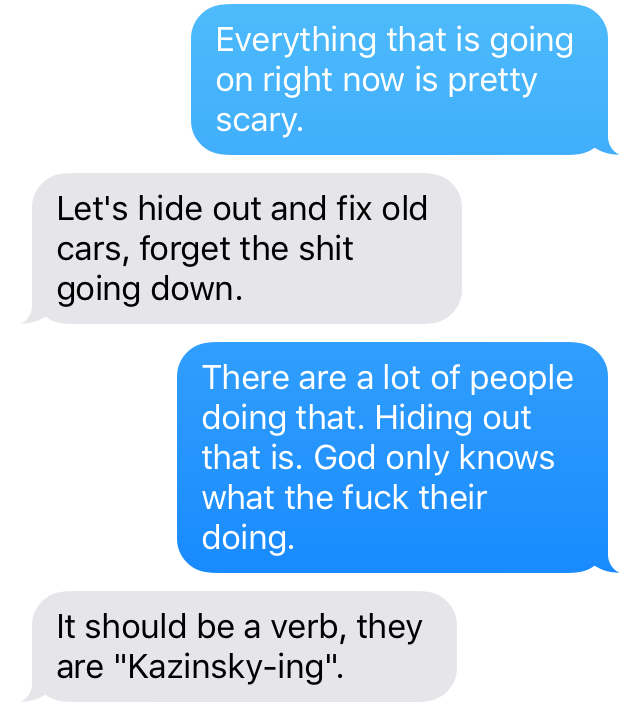 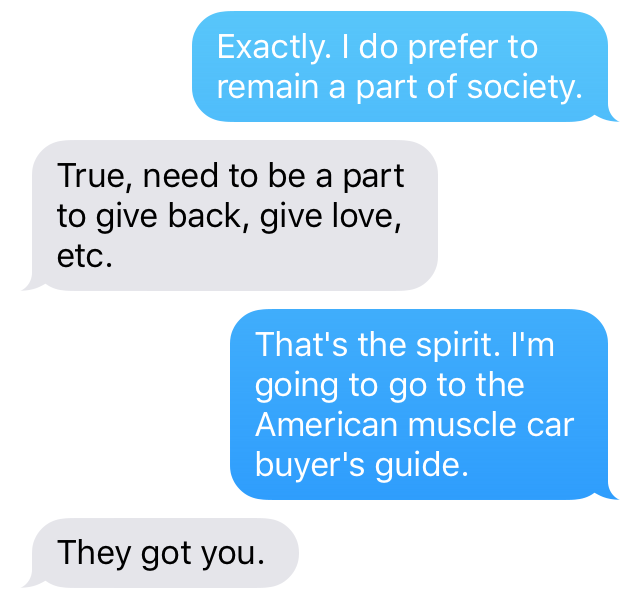 So the search continues.  The right car will come along at the right time, I know that.  I’m having a blast looking.

And by the way, I’m currently wearing a Rolling Stones t-shirt, can’t stand Donald Trump, am a pro-choice female business owner who prays to Mother Earth but I don’t have any tattoos.  A permanent symbol of personal expression forever imprinted on my body?  Not quite there yet.