Holy smokes it’s been weeks since I’ve been home and I haven’t told you about week two of the Kentucky maiden voyage!  With the Firebird finally running and out of the garage, Mavis was now the center of attention.  Yes…Mavis.  Makes me think of a wise old lady, African American, steady, proud, and cool as shit.  Cross her and she will KICK YOUR ASS.  “Sleeper” is a term for a car that looks unassuming, isn’t overly showy or flashy but can pack a punch in the power department.  Mavis is going to be a sleeper, classy and quiet, but ready to tear it up if need be.

But, we need to break Mavis down before building her back up.  The goal of the week was to get the engine and transmission removed.  To do that, you need to disconnect anything attached to them and take off anything that would impede their removal.

Me and the old man in our workspace.  Mavis, now in the spotlight.

We started with the fender, headlights and grill.  I found that there is no such thing as “just unscrew that bolt” in these old cars.  The bolt has been bolted for 40 something years, rusted, perhaps bent and can be a bitch to get off.  I find this to be a great challenge.  We spray it down with our trusty Kroil, let it sit for a bit and then go at it.  Sometimes it’s brute strength that’s needed,  sometimes it’s finding the right tool or angle to finesse it off.

As we removed parts, Pop would explain them to me;  what they did and how they worked.  Everything was saved regardless of needing to be replaced or not.  We’d make notes of what we needed to either buy, repair or find in a junk yard.  Parts were stored in labeled containers according to what they were.  For example, headlights, their rims, bowls and wires were in a box, and all engine bolts, screws, washers and nuts were put in an old coffee can.  Wires were labeled with a sticker and note so we knew what the hell they were connected to and larger parts (hood, front fender, bumper) were propped up along the garage wall.

The parts cart including transmission, valve cover and fly wheel.  We used to use this cart to roll the garbage to the bottom of the driveway when I was a kid. I told you, the P’s get rid of NOTHING.

Pop and I work well together because we tend to work alike.  We stay organized, work slowly and thoroughly and keep the workspace clean as we go.  It’s funny to watch him and see where I get some of my quirks.  When there were too many tools out and he’d step on one or one of us would catch a foot on the air hose and trip, we’d both seem to do a little freak out thing.  You feel a little clausto and disorganized and have to ‘tidy up’ before moving onto the next task.  It’s something about the state of your surroundings directly affecting your ability to deal.

We worked in this way for a couple days, removing every wire, tube and pipe attached to the engine.  While Pop was at breakfast with friends one morning I felt the need to get a jump on things.  Momma was in the garage with me and we had been poking around, seeing what we could clean or whatever.  I got a bit bold, decided it would be a good idea to remove the radiator and went about the business of draining it.  Momma sat in a chair, one leg crossed over the other, bouncing her foot like she does, and watched.  I undid the top hose and was surprised as to how much antifreeze came out.  Luckily I had already thought to put a bucket underneath to catch it.  Feeling confident, I proceeded to loosen the bottom hose, which started a slow drip.  Sat back with Momma to wait, but soon became impatient and decided to pull the entire hose off.  HOLY SHIT!  Neon green fluid spewed from the thing like projectile vomit!  The power of it knocked the bucket over and flooded onto the floor.  I’m screaming, “Oh my God!!!” trying to get the hose back on which only intensified the spray.  It was flowing like a firehose! I finally get to the bucket just as the last of the antifreeze empties out with a belch and it’s over as quickly as it started.  Momma’s still sitting in her chair and she says quietly, “wow.”  Clean up involved mops and the garden hose and when Pop got home I told him about my faux pas.  That’s when he showed me the petcock at the bottom of the radiator, a small valve conveniently located to drain the antifreeze.  (Yes, it’s called a petcock.  Awesome.)

Eventually it was time to remove the engine and transmission.  Pop and I cut the exhaust off all together as it was junk.  That was interesting…Pop on his back under the car with a sawsall bouncing around on the pipe, inches from his face.  We were, though, wearing safety glasses.  We supported the rear of the engine, then disconnected and removed the transmission.  Removed the bolts from the front motor mounts and lifted the engine out with the chain fall.  We are fucking pros! 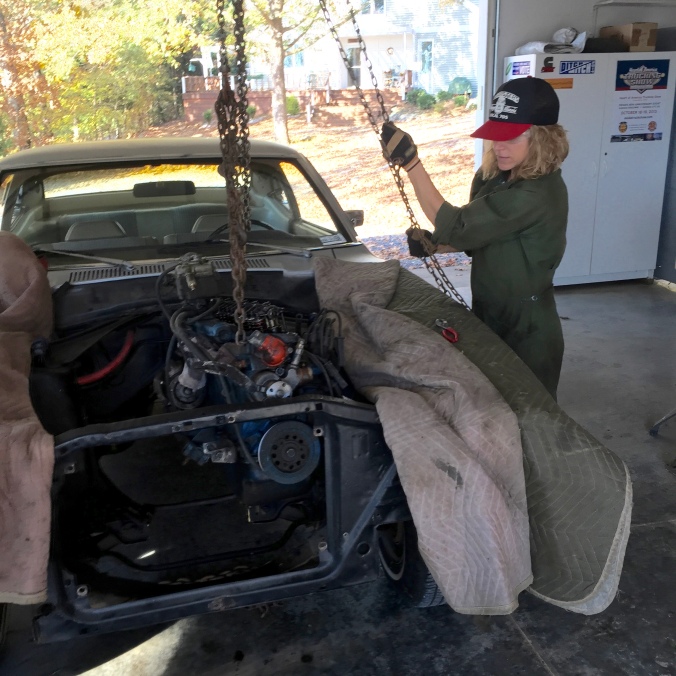 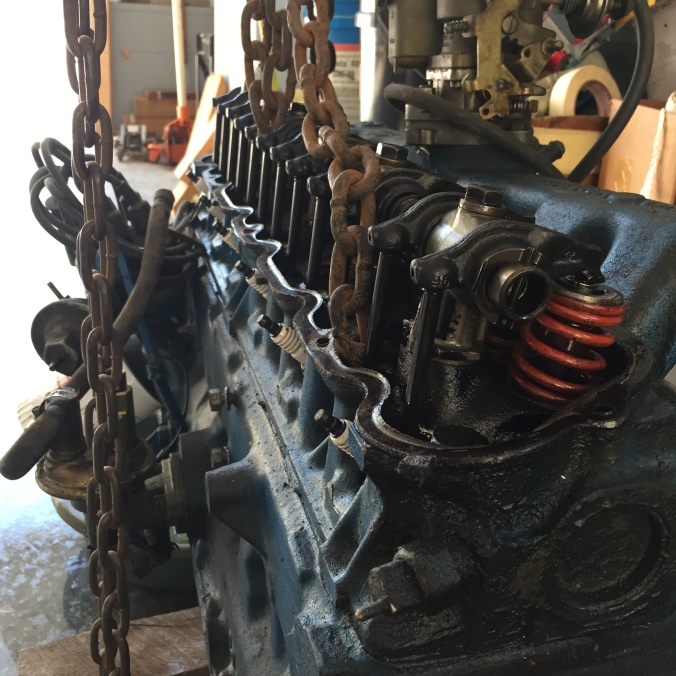 The inline 6, chained up and out.

Mavis, now just a cold, empty shell of herself. 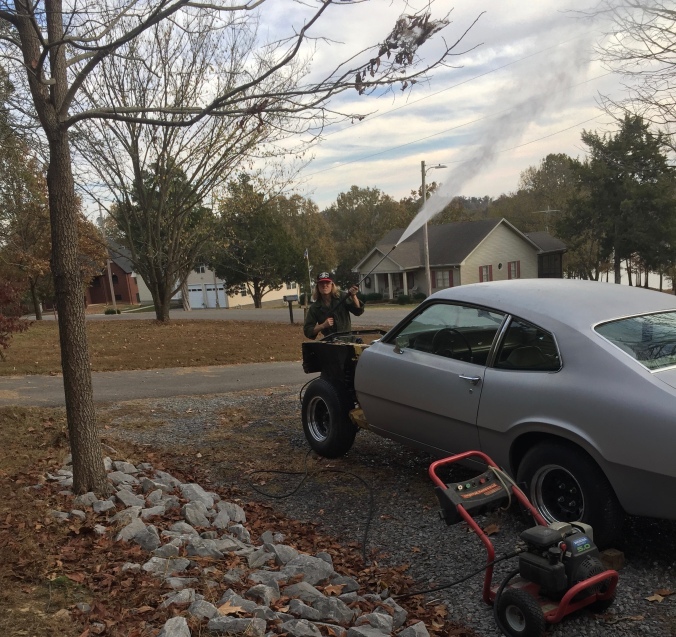 We sprayed the engine compartment down with degreaser and gave her a rinse.  God how I love a power washer!

And this is how I left her (after we pulled the wheels off).  On stands for the duration, engine extracted, ready for her make over.

Although we did get a lot of work done, I was able to spend a little fun time with the P’s.  I went with Momma to her water aerobics class a couple times.  Me and 20 plus ladies from about 60 to 80 years old moving some serious water, chatting it up.  I saw neighbors Danny and Vicki, who were so thoughtful and brought me a Life magazine that had a 1972 Maverick ad in it.

The three of us attended a surprisingly religious bluegrass concert at the Kentucky Opry House.  Apparently the word ‘gospel’ in the program title didn’t tip us off.  We went with it, had a great time and Pop kept saying, “I don’t know, I just keep smiling.”  We met Pop’s friend Jimmy there who is 89 and peppy as ever.  It’s not often you get a chance to talk with someone who starts a conversation by saying, “When I was in the Philippines during World War II.”

Pop has some stories himself and I thought I had heard them all, but during my visit things would spark a memory and he would share.  While laying under Mavis, draining transmission fluid, he told me about the old gas station he worked at as a kid.

“We moved from Rogers Park (Chicago) to Wilmette when I was 12 and I always hung around the gas station a block away.  It was called Lee’s Shell and I just showed up and started doing stuff.  The place was full service so I’d check oil, wash windows, whatever.  I wasn’t in high school yet and I don’t even know if I was paid.  Eventually I worked part-time for a little money and stayed until they sold the place when I was 17.

I was there by myself one day, I was 13 or 14.  A guy brought his car in for an oil change so I put it on the lift, drained the oil and put 5 quarts back in.  I collected his money and he left.  Turns out I hadn’t drained his oil, but mistakenly had drained his transmission fluid instead.  The guy calls later from across town with a burnt up transmission.  I was devastated…I cried…it was terrible!  Must have been a couple hundred bucks that came out of my pay to rebuild the guy’s transmission.  I remember I had to take some money out of my savings.  Very young mistake.  Lee probably would have let me get away without paying for it, but I insisted.  I was in tears.

Lee was a heavy set, rough guy.  He was nice enough to me.  Gad, the people that hung around that place.  Willy T was a Chicago Outlaw who worked there.  He was real thin, rode his Harley.  He was a full time bad dude.  Two other guys hung out there, motorcycle guys, two characters.  They had a Cushman, big motor scooter, that they had put a Harley Davidson engine in.  It was like an 80MPH Cushman!  I remember one night they were drinking and had to go to the hospital because they had crashed into each other.  They were all alcoholics.

They were all nice to me though.  They’d give me beer and let me smoke cigarettes.  I would be with Lee and on some occasions we’d go get parts or whatever, I’d tag along.  Sometimes he would go to collect bills from the housewives.  He would go into the house and I’d wait.  Sometimes he took a long time to collect the bill.”

One thought on “Mavis, Deconstructed”